Some of the "not-photography" projects that have I've done. These include coding, design work and so on.

One of my favourite gripes is 1366x768 displays on laptops. They are the most useless idea - unless all you ever do is watch films on your computer. What happens is if you want to use say GiMP, the bottom 15% of the tools go irretrievably below the fold. Bet you the GiMP devs all have FHD displays and never see this. The famous "hey, it works on my computer.." syndrome. Many other packages also have things sliding offscreen.

If you just run the command, it reports all known video output devices and their status, along with resolution modes, current dimensions and so on. With a little distillation, on my 'spare':

are the three options of interest. The disconnected ones are useful because this is where you plug in something external like a projector. And projectors are often only 800x600. I would like to double that to say a far more acceptable 1600x1200. Which all led me to these three scripts:

Add these to your $HOME/bin folder and run as needed. Maybe first check with just xrandr to see the device names (adjust accordingly) and their resolution. The output is not going to be 100% pin sharp as we are fuzzing pixels, but at least the toolbars in many pieces of software now actually fit on the screen. As always, no warranties and YMMV.

In revamping the Car Club site, I developed a PHP calendar function that generates a CSS styled table for a given month. It is quite flexible in how you can use it (3 ways / data structures).

I have seen a $PS1 prompt with some distros and setups which I rather like. So I set some time aside and implemented it for both Manjaro and Mint - for regular users and root.

November 2020 saw another iteration of my website "master model" which in the passing months has had some refinements and new features added. The last 'jump forward' this big was in 2016, after spending weeks poring over books on responsive design. Now even my simplest template is responsive. I try to re-use my models for other sites I support, so they end up quite similar in style.

And my style, is my style. I have searched high and low and actually do not like most of the 'modern templates.' They lean 99.6% on massive but 'free' frameworks while weaving in proprietary code, and/or have code that has 32 levels of indented <div> tags in which no superhuman could discern where anything is - neither form nor function.
What you see here is hand-coded, lean, fast. Components like the menu are scripted so they live in one place only.

In 2020 the Car Club I'm involved in turned 25. Celebrations were delayed until October, but for me this already started 5 years earlier. I had created a 20th icon (and did the calendar), but then created artwork forward to 25 years. And then for the 25th I went further with a whole new Club badge. These were strictly limited to pre-orders, so only 43 exist, plus another 7 with the red and yellow swapped - those were auctioned off for a good cause.

And of course I took photos all weekend long at the three big events we had. The results are on the Club »website.

With all the 25th stuff behind us, I am starting to work on potential new designs for the Club logo and badge - for the "next 25 years."

Now that the children are adults, my wife Colleen has taken up proofreading and copy editing as a small business called »WordWyze. That quickly expanded into the full process of assisting authors in getting their books from manuscript to physically published.

So to present the books we needed "3D" covers long before the actual book is uploaded to the printers and weeks before any physical copies exist. So I found some free book template images and wrote a bash script that uses the imagemagick suite to assemble the front cover image and the templates. Some examples:

I recently revisited this script to add a thinner book, so that shorter books can look closer to their actual thickness. And so I've updated two of the three above.
Now and then I am also designing the cover - front, spine and back. These have to be pixel-perfect for the printers. With "Dreaming of Thee" it involved photographing artifacts for the cover and then the whole cover design. With "Undercover" it was more assembly and effects in GiMP, a lot of all three. With "A Kiwi in Pang" I massaged old slides, found and traced maps, sourced an appropriate Inuit-styled font, as well as photographing artifacts and making the frontispiece.

Over the years there have been innumerable other projects. Many websites for people and organisations - some deployed, others not. Among the recent ones was a quick website for a Lego group to launch them, and a get-back-online website for a someone I met via the car club. I have since handed off the reigns on both.

For 2016 and 2017, I created an A4 calendar for the Car Club. Enough were sold to just break even. It is a lot of work, plus I landed up being the lone saleman. 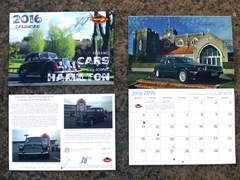 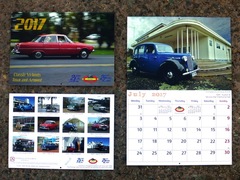 In 2014 while we went on the first proper family vacation in years and missed the coldest week at home. Meanwhile some folks at our church had recorded an album in that time. When we got back I was asked to create all the case artwork. This was all done in 3-4 days as everything was about to be sent off to production. Only some 100 physical copies of this CD exist, but it is available for free on »SoundCloud. 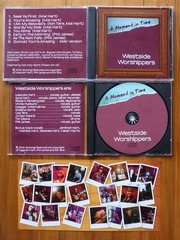 So I'm going to share a little secret on how I actually get all these projects completed so efficiently.
I have … a ◯tuit.